Eurockot through its Rockot launch vehicle equipped with the modern Breeze upper stage with multiple restart capability can offer a wide variety of mission profiles tailored to specific customer needs. This allows the customer additional flexibility in mission design such as for instance orbital plane changes, variation of line of apsides or separation point.

In the meantime, Eurockot has now demonstrated in-flight the major mission capabilities of the Rockot launcher and Breeze. This includes different types of trajectories such as polar and sun-synchronous orbits, multiple re-start capability of the upper stage for plane changes and orbit raising, injection of spacecraft into different orbits in one mission and more.

A typical Rockot mission is described in the following section. Generally, the first part of the mission profile with the operation of the SS-19 based first and second stages and fairing jettisoning is very similar from mission to mission. Customisation of the mission mainly occurs during the Breeze upper stage flight by varying the durations, number and timing of the Breeze main engine burns. The Sun-synchronous mission described is very representative of Eurockot missions, due to the fact that the mission duration is of a typical duration and that multiple upper stage main engine burns take place for circularisation and plane burn change manoeuvres.

1. Lift-off & Ascent Phase
The vehicle is launched into a North-North-Westerly direction towards the Arctic Ocean. After about 60 seconds of flight the vehicle's maximum dynamic pressure is reached and shortly thereafter at approximately 120 seconds after lift-off the 1st/2nd stage separation takes place. The payload fairing is ejected after 178 seconds when the Free Molecular Heating rate has reached acceptable levels.

2. First Breeze-KM Ignition
This first ignition of the Rockot third stage Breeze occurs just after 2nd/3rd stage separation and injects the orbital block with the satellite into an elliptical transfer orbit with a perigee of 151 km and an apogee of 967 km inclined at 99°.

3. Breeze-KM Coast Phase
The Breeze stage drifts along an half ellipse using a classic Hohmann transfer orbit until it reaches its apogee at 1000 km approximately 1 hour later. During this phase it performs pre-programmed thermal manoeuvres to keep the payload within specified temperature limits.

4. Second Breeze-KM Ignition
Upon reaching its apogee at 967 km, the Breeze stage is ignited for approximately 35 seconds to position itself into a circular orbit of 1000 km. This second burn of Breeze usually includes the final inclination correction.

5. Spacecraft Separation and Third Breeze-KM Ignition
The spacecraft is separated as the Breeze has entered the visibility zone of the ground stations 5782 seconds after the lift-off. Approximately 660 seconds later, the Breeze leaves the spacecraft target orbit by final ignition of the main engine to reduce the orbit velocity and hence perigee for a rapid decay to re-entry. 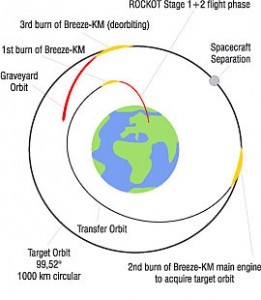