SERVIS-2 was launched successfully  on June 02, 2010 at 01:59.01hrs UTC from the Rockot launch pad at Plesetsk Cosmodrome for the Institute for Unmanned Space Experiment Free Flyer (USEF) of Tokyo, Japan. A Rockot launched SERVIS-2 into a sun-synchronous orbit of 1200 km altitude, corresponding to an inclination of 100.4 degrees. The mass of SERVIS-2 was 740 kg. The interface between the Breeze upper stage and the spacecraft consisted of a Khrunichev Space Center-developed conical adapter which was equipped with an EADS CASA Espacio 937 mm clampband. 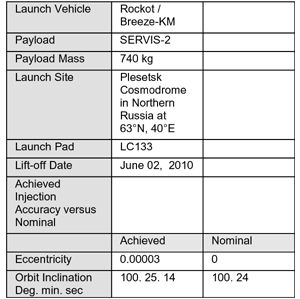