The last few days have been spent with unpacking and settling in at the integration and test facility MIK.

Following the establishment of cleanroom conditions in the dedicated spacecraft area, the satellite container was opened for the first time after transfer to the launch site. Sentinel-3B was mounted on a dolly and moved into its cleanroom.

During the next two weeks, the satellite will undergo extensive testing operations. Following the first switch-on of the spacecraft, a successful test of the S-band telemetry and commanding systems was performed. Further electrical checks and tests of the propulsion subsystem will follow during the next days. The multi-layer insulation, protecting the satellite from adverse thermal conditions in space, is currently being finalized on Sentinel-3B.

In parallel, the Rockot launch vehicle is being prepared for check-outs and installation on the launch pad. The lower part of the rocket, the so-called Booster-Unit, consists of the propulsion stages of the inter-continental ballistic missile SS-19 (Russian designation RS-18) and is stored in its transport and launch container. The Booster Unit inside its container currently undergoes preparations inside the integration facility MIK for a roll-out to the launch table: the tube-like container is being covered under thermal blankets as protection against adverse climate conditions during the on-going winter in Northern Russia.

The Breeze-KM upper stage, which will eventually inject Sentinel-3B into orbit, is getting ready for electrical testing within the next days. 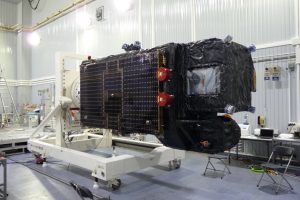