Three days before lift-off, the "Sentinel-5p on Rockot" mission took another important step towards launch. As two complex space vehicles, the Sentinel-5p satellite and its Rockot carrier together with their ground systems, need to be readily configured for flight at a precise point in time, detailed operational procedures need to be followed in order to guarantee a successful launch countdown.

The launch dress rehearsal is the opportunity to verify the consistency of countdown procedures and it ensures that the launch teams practice their roles during the big day. As part of the countdown, the Sentinel-5p satellite sitting on its rocket was activated and gradually prepared into launch configuration - just as it was about to take off on Rockot. Part of the rehearsal was ESA's European Space Operations Centre in Darmstadt, Germany, which will take control over Sentinel-5p once in orbit.

At the same time, the launch teams executed the countdown process from the Mission Control Center at the Plesetsk Cosmodrome. As a result: The "Sentinel-5p on Rockot" team is GO for launch. 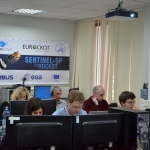 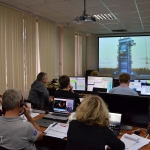