Yesterday at the crack of dawn, the Rockot Ascent Unit (i.e., the Breeze-KM Upper Stage and the Sentinel-5p spacecraft, integrated under the Payload Fairing) was rolled out of the integration facility MIK on a train headed for launch area 133.

In order to maintain the required environmental conditions for the Sentinel-5p payload during the transfer to the pad, the fairing was covered with a thermal blanket; an air-conditioning railcar connected to the train provided cleanroom rated air circulation en-route.

Arriving at the Cosmodrome's launch pad 14П25, the wrapped up Ascent Unit was lifted inside the service tower and lowered onto the Booster Unit. The Booster consists of the propulsion stages of the converted inter-continental ballistic missile SS-19 (Russian designation RS-18) and builds the first two stages of the civilian Rockot launcher.

The Booster had already been installed on the launch pad for testing in its Transport and Launch Container (TLC). Attached to the launch mast, the TLC will serve as the launching platform; a distinctive feature which reflects Rockot's descent of a mobile weapon system.

The integration of the launch system on the pad was completed through the installation of the TLC extension which provides umbilical connections to the Upper Stage. In the meantime, Sentinel-5p has been powered up through electrical umbilical lines from the under-table room (the vault located under the launch table).

The next major milestone on the way to lift-off on October 13th will be a launch dress rehearsal on October 10th and launcher fueling the day after. Permission for launch will formally be granted through the (technical) state commission on October 12th. 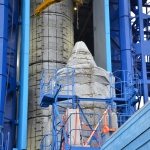 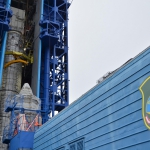 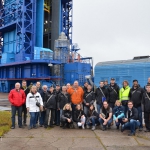 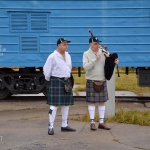 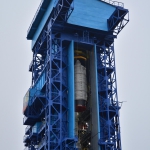 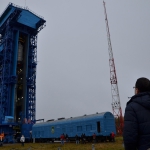 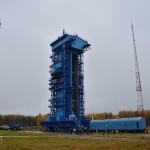