Since the installation of the integrated launch vehicle on its pad, Rockot and the Sentinel-5p payload are being serviced in preparation for launch in four days from now.

The rocket is standing inside the Transport and Launch Container which is attached to the stationary column holding the launch vehicle in place. Access to the launch system and the spacecraft (or rather the satellite interface in the payload fairing) for preparatory work is achieved through several gantries on various levels inside the service tower. The service tower, which is actually not a launch tower, will be retracted approximately ten minutes before lift-off to clear the launch pad allowing Rockot to shoot out of the launch container and to climb the skies.

Electrical check-outs and calibration runs on Sentinel-5p are currently conducted in order to confirm the flawless functioning of the spacecraft after the roll-out to the launch site. The spacecraft team will pay regular visits to the payload on the pad until shortly before launch in order to ensure a continuous purging of the instrument with nitrogen gas as a protective measure against contamination on ground.

In parallel, the Russian Space Forces, in their role as launch operators, are installing the pipelines connecting the Booster Unit with the fuel and oxidizer tank storage. The fueling of the first two rocket stages will take place two days before launch. 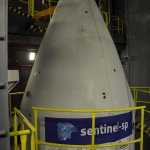 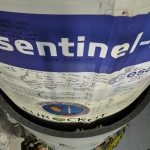 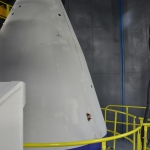 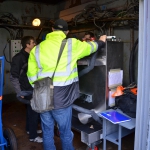 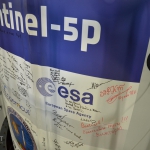 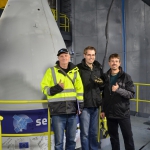