Last Glimpse at Sentinel-5p: Encapsulation of Satellite inside the Rockot Ascent Unit

After a successful mating of the Sentinel-5p spacecraft onto the Breeze-KM yesterday, the so-called Ascent Unit was assembled today. The Ascent Unit comprises the upper stage and the payload fairing enclosing the satellite; it is the part of the Rockot launch vehicle which will pass through the atmosphere and will eventually (after fairing jettison) reach orbit.

The encapsulation of a satellite under the payload fairing always marks a special moment of the launch campaign: the spacecraft is seen for the last time before it disappears behind the nose cone of the rocket, only to be released again into space. This memorable event attracted numerous campaign members into the clean room to have a last photo taken in front of Sentinel-5p resting on its launch vehicle. 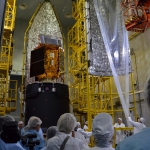 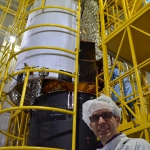 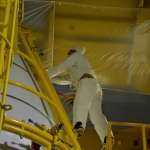 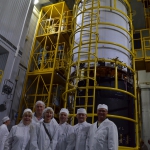