Today, in one Month’s Time, Sentinel-5p will be Launched

The launch of Sentinel-5p on Rockot is scheduled for today in one month. In this phase the joint operations have not yet started. Both Launch Vehicle and Spacecraft team are busy with their standalone operations such as functional and electrical tests. The photo below shows the launch tower in its ‘new coat’. It was painted blue shortly before the launch campaign. 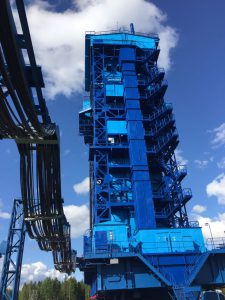