After re-generating their working force with a day off the teams today began the week with electrical checks on the Launch Vehicle as well as the Spacecraft. Also, the solar arrays of the Sentinel-5p satellite were checked with regard to their proper functioning while the fueling team continued their preparatory works. The fueling experts underwent a training related to the operations of the crane in the Cleaning Room. 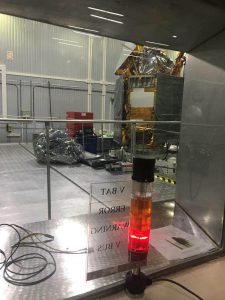