The last few days have been spent with unpacking and settling in at the integration and test facility MIK.

Following the establishment of cleanroom conditions in the dedicated spacecraft area, the satellite container was opened for the first time after transfer to the launch site. Sentinel-5p was then carefully lifted out of the container, mounted on a dolly and moved into its cleanroom. The satellite is now ready to undergo extensive testing operations during the next two weeks.

In parallel, the Breeze-KM upper stage, which will eventually inject Sentinel-5p into orbit, completed today the pneumatic checks successfully. 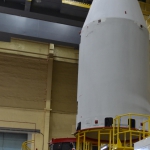 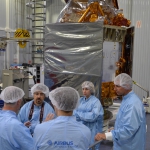 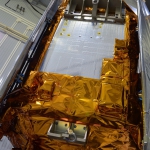