In parallel, the Payload Fairing (the two half-shells building the nose cone of the rocket encapsulating the Sentinel-5p satellite during ascent) was inspected and prepared for the so-called "dry run".

The dry run is an exercise during which the Ascent Unit (consisting of the Upper Stage, the Payload Fairing and – at a later point – also including the spacecraft) will be rolled out to the launch pad to be mated with the first two Rockot stages, the so-called Booster Unit. This test serves as verification of the interfaces of the complete system in launch configuration and is planned for end of next week.

The Booster Unit consists of the propulsion stages of the inter-continental ballistic missile SS-19 (Russian designation RS-18) which was delivered to the Cosmodrome in its transport and launch container – reflecting its descent of a weapon system. The electrical lines of the Booster Unit are currently tested before its installation on the launch pad.

Sentinel-5p started functional testing to confirm the spacecraft's integrity after its long journey. 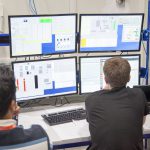