After a long and tiring journey through the night, the Sentinel-5p spacecraft and its international escort team arrived at crack of dawn at the municipal boundaries of Plesetsk. After swapping the engineering crew, the satellite train continued into the secured area of Cosmodrome.

After arriving at the integration and test facility (also known as MIK, short for Монтажно-Испытательный Корпус), the unloading of the launch campaign equipment started. The Sentinel-5p satellite, still sitting in its special container waiting to be moved into its dedicated cleanroom, lingers for the first time in close proximity to all Rockot launch vehicle components: the two-stage Booster Unit, the Breeze-KM upper stage and the Payload Fairing. 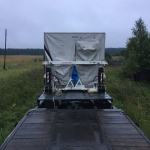 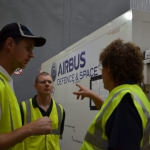 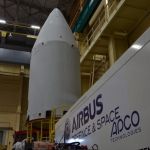 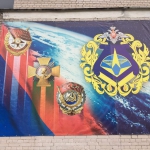 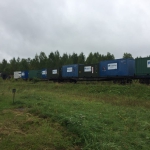