Following successful stand-alone testing of both, the Sentinel-5p spacecraft and the Rockot launcher, which led into fueling of both vehicles, the launch campaign reached today its key phase: Joint Operations.

Joint Operations describe the activities following the mating of the satellite with the launcher adapter system. From this point onwards, the launcher teams (Khrunichev Space Center, Space Forces) and the spacecraft teams (ESA, Airbus Defence and Space) need to closely coordinate their actions as their hardware is gradually mated into the Ascent Unit, the upper part of the rocket which will reach orbit.

After formally signing off the readiness certificate to commence with Joint Operations, the Sentinel-5p satellite was hoisted from its test stand and lifted above the adapter system. Careful adjustments to the alignment of the pendulous 1-ton-spacecraft were made by the joint team before precisely lowering Sentinel-5p onto the Rockot adapter interface ring.

Adapter and spacecraft interface rings are being strapped together by means of a clamp band. The correct installation of the band is key to guarantee the connection between Sentinel-5p and the upper stage under flight loads. Therefore, experts from the clamp band manufacturer, Airbus Defence and Space in Madrid (formerly CASA Espacio), supervised the installation.

The next level of launcher integration will be reached on Monday when satellite and adapter will be mated onto the Breeze-KM upper stage. The Breeze-KM returned to the integration facility MIK today - fully fueled.

The success of Joint Operations is due to commitment of the involved teams. On the occasion of starting Joint Operations, we show you today in our picture gallery a few faces behind the functions. (credits: Eurockot Launch Services) 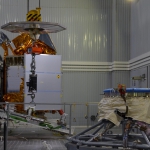 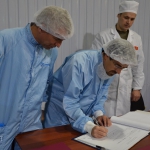 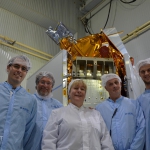 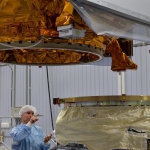 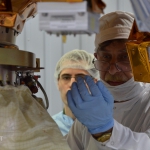 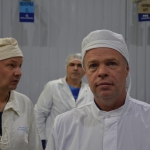 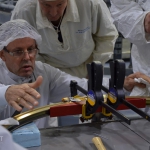 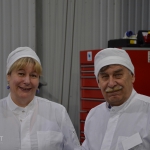 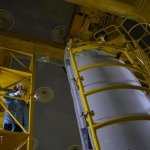