Fueling of the Sentinel-5p Spacecraft

The fueling team from the ArianeGroup site Lampoldshausen has been busy with the preparation of the hydrazine loading for more than a week. This morning the activities in the Integration and Fueling Facility MIK started with a briefing in order to double check the readiness of all parties involved in the fueling of the Sentinel-5p satellite. The actual fueling will last several hours.  Since it is a hazardous operation, only the fueling team was allowed to be in the clean room. The picture below was taken from the archive and shows the fueling of the Servis-2 satellite launched on Rockot in 2010. 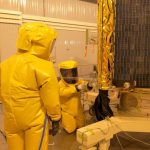