Today marks "Day One" of the "Sentinel-5p on Rockot" launch campaign. After a nightly stop-over for customs clearance in Moscow, the giant Antonov-124 aircraft with the Sentinel-5p satellite on board appeared in the blue skies over Archangelsk and touched down at Talagi airport at 10:30 local time. A delegation of ESA, Airbus Defence and Space, Eurockot and Khrunichev welcomed the spacecraft team in Northern Russia on a sunny late-summer day.

During the hours to follow, the complete cargo bay of the Antonov aircraft was re-loaded onto trucks for further transportation to Archangelsk rail yard – at minimum speed to protect the delicate freight. Once on the loading ramp, the containers housing the satellite and its engineering equipment were hoisted onto rail cars.

Thanks to our partners from Khrunichev, Airbus Defence and Space and the railway authorities, the entire transshipment was completed in less than eight hours. The dedicated Sentinel-5p train is now on its way to the Plesetsk Cosmodrome with record-breaking slowness. Although only some 250 km away, the train will spend almost ten hours to reach its destination tomorrow morning – again for the sake of pampering the spacecraft. 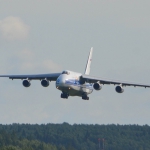 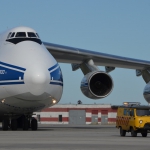 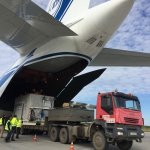 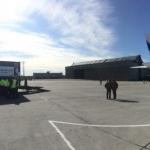 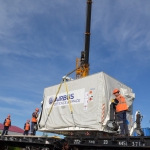