If everything goes on according to the planning tomorrow the spacecraft+adapter stack will be installed on the Breeze Upper Stage (US). The US was fuelled and brought to the processing facilities (MIK) from the fuelling station tonight being processed now for the mating with the SC tomorrow. 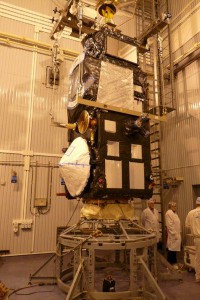 Sentinel-3A maiting with the adapter system