Yesterday was the first day of the so called combined operations aiming at stacking the spacecraft on top of the upper stage.

The mechanism that holds both together, the Adapter System, has also the task to separate and inject the spacecraft when the target orbit is reached. It mainly consists of a tightened clamp band or ring which is released by means of a pyro element at time of separation. 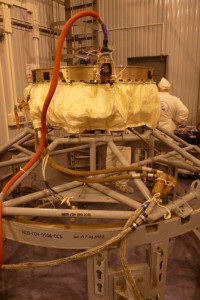 Electrical checkout on the Adapter System