Sentinel-3A back in testing mode

The Sentinel-3A launch campaign resumed with the removal of the satellite from its container. After clean room conditions had been reinstated and the cleanliness was checked, the spacecraft could be released from the protective environment inside the container to be returned into the dedicated clean room for further processing.

With the opening of the spacecraft container on January 13th, Sentinel-3A was subjected over two days to a couple of maneuvers to be brought back to its test stand: lifting out of the container, mounting on horizontal handling device, erection into a vertical position, and mounting on its stand.

Sentinel-3A currently undergoes electrical testing and final installation of multi-layer insulation (MLI) to get ready for fueling mid of next week.

The activities on the Rockot launcher will resume next week to be synchronized with the satellite schedule. Satellite and launcher activities will be coordinated as part of the joint operations in about ten days. 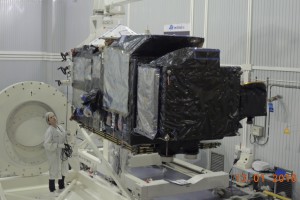 Handling of Sentinel-3A spacecraft after removal from its container 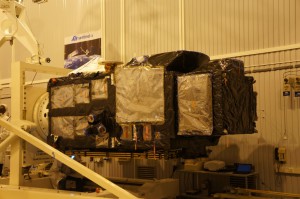