As part of the formalities for a launch approval by Russian authorities, the Rockot launch system infrastructure has to undergo a certification process. For a validation of the launch pad, a check involving the launch vehicle has been foreseen. This test requires a further launch system dry run on January 30th. As this dry run includes the roll-out of the Breeze-KM upper stage to the pad, fueling of the stage (originally planned for this week) had to be postponed.

With the delay of upper stage fueling, all launch campaign activities had to be put on hold temporarily. Activities on the Sentinel-3A spacecraft will resume on February 1st with the propellant loading. Until then, the satellite will remain in a stand-by mode. Starting yesterday, the Sentinel-3A batteries were discharged.

The delay in the launch campaign will results in a new launch date during the second half of February. 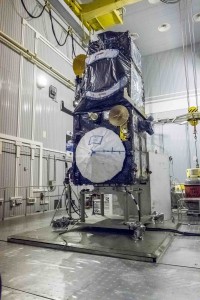 Sentinel-3A satellite in a stand-by mode