After arrival at the Rockot integration facility (MIK), the Sentinel-3A satellite was unloaded from its transport container and erected in the dedicated spacecraft clean room. On Saturday, December 5th, the satellite was powered up for the first time after a long journey marking the start of various electrical test runs.

In parallel, the Breeze-KM upper stage and the payload fairing have arrived at the MIK for extensive check-outs in preparation for a launch vehicle dry-run and eventually mating with the spacecraft.

On Monday, December 7th, the Sentinel-3A team started the propulsion system checks. During these activities, the propellant tanks are pressurized to confirm their structural integrity before the spacecraft may be fuelled. 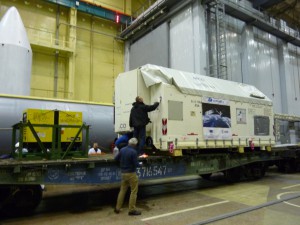 Unloading of spacecraft container in the MIK General Hall; payload fairing in the background