The Sentinel-3A satellite successfully passed the functional test series which kept the spacecraft team busy for the past two weeks. The platform and instrument subsystems have been deemed healthy and are ready to carry out their mission.

The Rockot launch vehicle completed the dry run and associated checks with success as well. Having been returned from the launch pad to the test and integration facility MIK, the Upper Composite (occasionally also referred to as Space Head Unit) is currently disassembled again into the Breeze-KM upper stage and the two half-shells of the payload fairing.

The completion of stand-alone testing of the satellite and launch vehicle marks a new phase in the launch campaign which will go into a break over the holiday season. In order to keep the Sentinel-3A spacecraft in an optimal environment during the upcoming three-weeks-long storage period, the satellite will be put back into its container. The handling activities commenced today; by Monday the spacecraft will be enclosed inside its container and exposed to a protective atmosphere.

The launch campaign team will return home on December 22nd; only a small group of five will stay at the Cosmodrome to watch over Sentinel-3A. The campaign will resume in 2016 on January 11th.

The Eurockot team wishes all fellow launch campaign members and their families happy holidays and a cheerful time for recreation. We are looking forward to a successful start together into the New Year with the continuation of our common work. 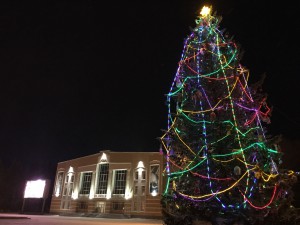