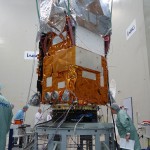 In preparation of the launches of the EU/ESA Copernicus Sentinel-3A and Sentinel-2B satellites on Rockot in 2015 and 2016, the launch adapters for these missions were fit-checked successfully. 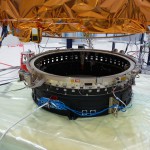 Launcher adapter for Sentinel-2B with a CASA CRSS 1194 mm Clamp-Band.

This was followed by Sentinel-3A fit-check in December at the test center of Thales Alenia Space in Cannes. The purpose of this test was to check whether the mechanical interface between the both spacecraft and adapter was performed correct. After the fit-check a separation test was also carried out first of all to check proper behavior of the adapter separation system including CASA clamp band as well as to get sure that the shock loads arising during this test don’t exceed the designed shock values. 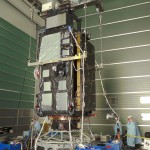 Installation of Sentinel-3A on the adapter

The test results proved a nominal behavior of the adapter separation mechanisms according to the design specification. These important project milestones brought Eurockot and its partner Khrunichev one step further to the launch of ESA's missions.