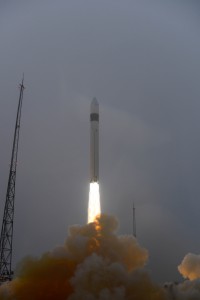 Bremen, January 29, 2014: The European Space Agency (ESA) has converted a previously contracted back-up launch on a Rockot to a firm agreement with Eurockot Launch Services GmbH for placing into orbit an additional spacecraft from the Copernicus Sentinel range of satellites. Sentinel-5p will be the third satellite from this series to be launched from Plesetsk Cosmodrome on a Rockot. ESA had previously contracted Eurockot for the launches of Sentinel-3A and Sentinel-2B, respectively in Q2 2015 and Q1 2016. Sentinel-5p is scheduled to be launched during the course of 2016.

Eurockot recently performed the successful combined launch of the 3 Swarm satellites for ESA on November 22, 2013.

Copernicus (formerly GMES – Global Monitoring for the Environment and Security) is the Earth observation satellite programme, funded by the European Union with ESA carrying out the implementation of the programme, including amongst others spacecraft contracting and launch services. Sentinel-5p is under construction at the Stevenage facility of Airbus Defence and Space in the United Kingdom.

With a mass of approx. 900 kg, Sentinel-5p (p for precursor) will monitor the air quality of the atmosphere by means of the TROPOMI atmospheric composition spectrometer instrument (TROPOspheric Monitoring Instrument) built by Dutch Space and jointly funded by ESA and the Netherlands Space Office (NSO).

The Rockot launcher will inject the spacecraft into a sun-synchronous orbit of approx. 830 km altitude.

The next Copernicus Sentinel spacecraft on the manifest of Eurockot is Sentinel-3A which is presently scheduled to be launched from 2Q 2015 from Plesetsk Cosmodrome. The launch of Sentinel-2B, which replaces the initially planned Sentinel-2A, shall take place at the beginning of 2016.

Eurockot Launch Services GmbH is the joint venture operated by Airbus Defence and Space (51%) and Khrunichev Space Center (49%) and provides launch services to commercial and institutional operators of Low Earth Orbit spacecraft. Eurockot is based in Bremen, Germany.