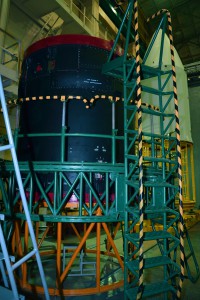 While all three Swarm spacecraft have been reunited in clean room 101A, the Breeze-KM upper stage, unloaded into the General Hall, is being prepared for pneumatic checkouts. At a later point, the payload fairing will be transferred from the General Hall into 101B which has just been cleared after the completion of spacecraft fueling activities.