Tuesday, October 8, 2013, started with further Swarm No. 1 satellite processing for the Freon loading. The loading itself is planned for tomorrow. While the Swarm No. 1 tanks have been vented, the Swarm No. 2 spacecraft has undergone functional tests.  Later today leak checks will be performed on the Swarm No. 1.

Since some of the experts here will leave the cosmodrome in a couple of days, a picture of the Swarm team was taken outside the processing facility MIK (see photo). 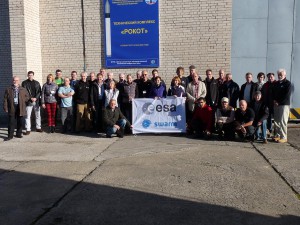