Spacecraft loading with Freon has continued today with Swarm No. 2 while the other two spacecraft were undergoing electrical checkouts. The electrical checkout equipment is not installed in the cleanroom in which the spacecraft are located but in the Electrical Ground Support Equipment (EGSE) room adjacent to it. As shown on the photo, the electrical lines are routed through so called feed-throughs in the wall in order to maintain the cleanroom conditions. 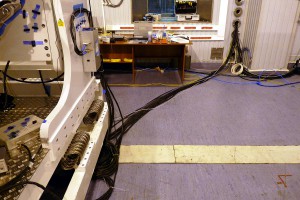