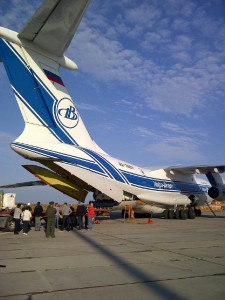 The launch campaign for the three Swarm satellites  Eurockot will launch for the European Space Agency started today when the first of the satellites was flown into Pero Airfield at Plesetsk Cosmodrome after customs clearance at ArchangelAirport.

The remaining two satellites will follow on September 19 and 21, 2013. The departure point for all three satellites is MunichAirport.

The launch team made up of ESA, Astrium, Khrunichev and Eurockot personnel arrived at Plesetsk Cosmodrome the previous week to prepare for the start of the campaign in situ.

The spacecraft will now be taken to the Rockot spacecraft preparation, fuelling and integration facility (MIK) from Pero Airfield for unpacking and further processing.

Swarm is a constellation of three satellites which will explore the Earth`s magnetic field and its change with unprecedented accuracy as part of the European Space Agency`s Earth Explorer range of climate research satellites.

They were built by Astrium GmbH and have a mass of about 500 kg each. Rockot will launch the three satellites together and inject them simultaneously into a Low Earth Orbit of 490 km altitude at 87.6 degrees inclination. Eurockot was awarded the launch contract in 2010 by the European Space Agency.