We announce the successful launch of the SERVIS-2 satellite at 01.59 h UTC from Plesetsk Cosmodrome in Northern Russia using a ROCKOT launch vehicle. The spacecraft was injected into a sun-synchronous orbit of 1200 km altitude. The SERVIS-2 mission is the successor to SERVIS-1 also successfully launched on a Rockot in October 2003 by Eurockot for its Japanese customer, the Institute for Unmanned Space Experiment Free Flyer (USEF) of Tokyo, Japan.

SERVIS-2, the acronym for the second 'Space Environment Reliability Verification Integrated System' mission, will be employed to verify the use of commercial off-the-shelf (COTS) components and technologies in space conditions. USEF developed and built SERVIS-2 under the auspices of Japan's New Energy and Industrial Technology Development Organization (NEDO) and the Ministry of Economy, Trade and Industry (METI). SERVIS-2 had a launch mass of 736 kg.

The launch of SERVIS-2 represents the tenth launch performed by Eurockot using the Rockot launcher and this launch also marks the tenth anniversary of operations which Eurockot commenced with its first launch in May 2000. 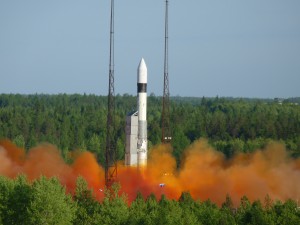