Rome/Bremen, April 09, 2010: The Earth Observation Directorate of the European Space Agency (ESA), Rome and Eurockot Launch Services GmbH, Bremen, today signed a contract for two satellite launches from late 2011 onwards. These launches comprise the joint launch of three SWARM satellites and a second generic launch suitable for different earth observation and scientific missions ESA is currently preparing. Both launches will be performed from Plesetsk Cosmodrome in Northern Russia using Rockot launchers. Eurockot won the contract after an international launch competition held by ESA in 2009.
The contract follows on from the successful launches of GOCE, SMOS and Proba-2 by Eurockot in March and November 2009.
The contract was signed by Prof. Dr. V. Liebig, Director Earth Observation of ESA and Dr. M. Oehm, CEO of Eurockot Launch Services GmbH, in the presence of the Prime Minister of the Federal State of Bremen, Mayor Jens Böhrnsen during a ceremony in the historic town hall of Bremen.

SWARM is part of ESA's Earth Explorer satellite programme to explore the earth's climate and create a better understanding of its changes.
SWARM consists of three identical satellites which will be launched together on a Rockot launch vehicle and which will measure the strength and direction of the earth's magnetic field and, amongst others, the interaction of the earth's magnetic field and ocean circulation from an altitude of slightly below 500 km. The launch of the three SWARM satellites is presently scheduled for mid 2012. Their manufacturer is Astrium, Friedrichshafen.

The second launch under this contract is termed generic launch for which ESA will select a payload later this year from a different range of earth observation and science satellite programmes currently undertaken. 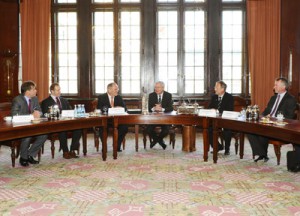 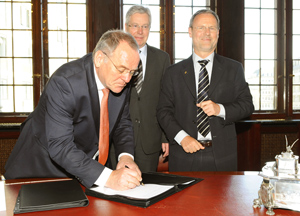